“The ultimate strength of this firm lies in its individuals.We have a unique combination of unquestioned legal and litigation skills, an understanding of markets and market value, and we provide clients with common sense and political judgment.” 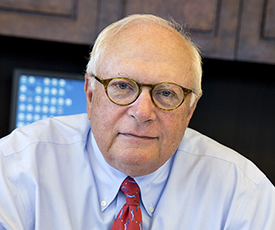 Since 1973, Kevin M. O’Keefe has concentrated his practice on a variety of property tax matters for hotel, office, industrial and retail properties. He has litigated property tax cases in numerous jurisdictions including Colorado, Florida, Georgia, Illinois, Iowa, Michigan and Texas. He is the author of several articles and has spoken extensively on property tax issues before a number of national and international audiences.

From 1993 until 1997, he served on the White House Staff of President Bill Clinton. As Special Assistant to the President for Presidential Personnel, he was responsible for the nomination and confirmation of all U.S. Attorneys and Marshals as well as numerous other presidential appointees. While in the Office of Inter- governmental Affairs, he liaised between the federal government and state and local officials on issues such as the 1994 Crime Bill, Empowerment and Enterprise Zones, and Welfare Reform.

Since his return from Washington, he has continued his practice in the property tax arena in multiple jurisdictions. He was honored by his law school with the 2009 Professional Achievement Award and as a member of the school’s 125 Alumni of Distinction on the occasion of the school’s 125th Anniversary in 2013.

“Representing clients requires lawyers to fully communicate what they are doing and why. The better we inform our clients and the more we engage them, the better will be the outcomes and clients will be better able to evaluate our performance.”

After School Matters, Advisory Board

U.S. District Court for the Northern District of Illinois, 1973